Feijoa: (the fruit) maturing in autumn, is green, ellipsoid, and about the size of a chicken egg. It has a sweet, aromatic flavor. The flesh is juicy and is divided into a clear gelatinous seed pulp and a firmer, slightly granular, opaque flesh nearer the skin. (Wikipedia)

Today, I’m feeling a little nostalgic. It’s LM’s fault, only he doesn’t know it. He took me to Thomas Dux this morning, and they had feijoas! I was almost beside myself (and not because they were $1.50 each!) This news quite possibly means nothing to you, unless you happen to be a Kiwi living in Australia. Kiwis grow up with feijoas. It’s quite common to have a feijoa tree or two in your garden. I’ll even go out on a limb and say that in New Zealand, they are more common than kiwifruit (when in season). When I was visiting a couple of weeks ago, I bought a bag of about 15 perfectly ripe feijoas for $3 at the farmers market. I ate them all myself. I love them. But in Australia, they are as rare as hens teeth.

Are you familiar with feijoas?

They are also known as Pineapple Guavas (or Guavasteen). According to our friends at Wikipedia, the plant “is an evergreen shrub originating from the highlands of southern Brazil, parts of Colombia, Uruguay, Paraguay and northern Argentina. They are also grown throughout Azerbaijan , Georgia and, (of course), New Zealand.*

While distinctive, the flavour is seriously difficult to describe. Wiki’ says it “is aromatic, very strong and complex, inviting comparison with guava, strawberry, pineapple, and often containing a faint wintergreen-like aftertaste.” LM hates the flavour, with quite some passion. And, it is true, people do tend to either love or hate feijoas.

Feijoas. They’re like chokos**, only not as tasty! (LM)

Given their exorbitant cost here, I only bought two this morning. And, I made sure I enjoyed every last morsel of feijoa flesh that I scraped out with my teaspoon. Heaven. 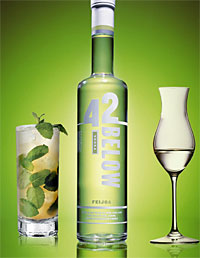 42 Below Feijoa Vodka
(Image from here)

In New Zealand, there’s a whole cottage industry around feijoas. You can buy feijoa ice cream. 42 Below has a yummy feijoa infused vodka. There are recipes galore for chutneys and baked goods.

If LM was just a touch more open to the wonders of the feijoa, I might make him this wee number I found at Adventurous Me, Gluten Free… 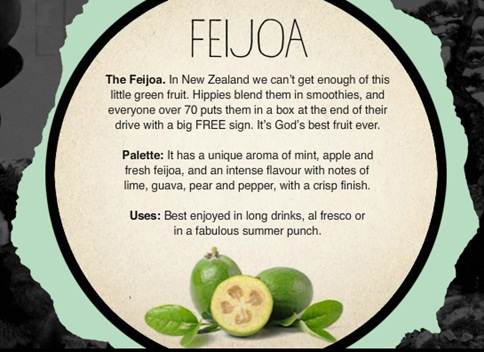 * Apparently, feijoas are occasionally to be found as landscape plants in the far Southern United States, in regions from Texas to Florida, and southern California, though fruit set can be unreliable in those locations.

24 thoughts on “I Say FEIJOA, You Say GUAVA PINEAPPLE…”