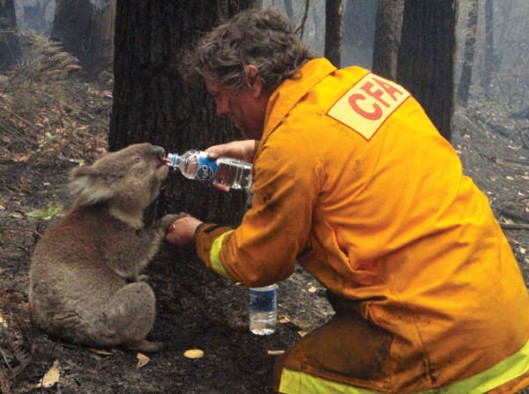 One of the coolest things about living in Australia is the abundance of native plants and wildlife. It is so different from the flora and fauna of New Zealand. And, it is not uncommon to see koalas, wallabies, kangaroos, wombats and echidnas in the wild here. I promise I’m not exaggerating. That makes Australia pretty special.

One of the worst things about living in Australia is the bush-fires. And, after a particularly mild winter, followed by one of the hottest and driest Octobers on record here in New South Wales, we have had a hugely destructive start to the summer bush fire season.

Julie Paterson is a bit of an iconic native Australian, too. As the founder of Cloth Fabric, she has developed a wonderful (not to mention very successful) outlet for her creative talent.

She’s also an ambassador to The Foundation for National Parks and Wildlife. And, as a way of generating support for the devastation caused by the recent bush fires, has designed the first two tea towels, in a series of three, to raise money for the foundation. $20 from each tea towel sold will go towards local organisations helping Australia’s native wildlife in bushfire affected areas.

What a great cause… 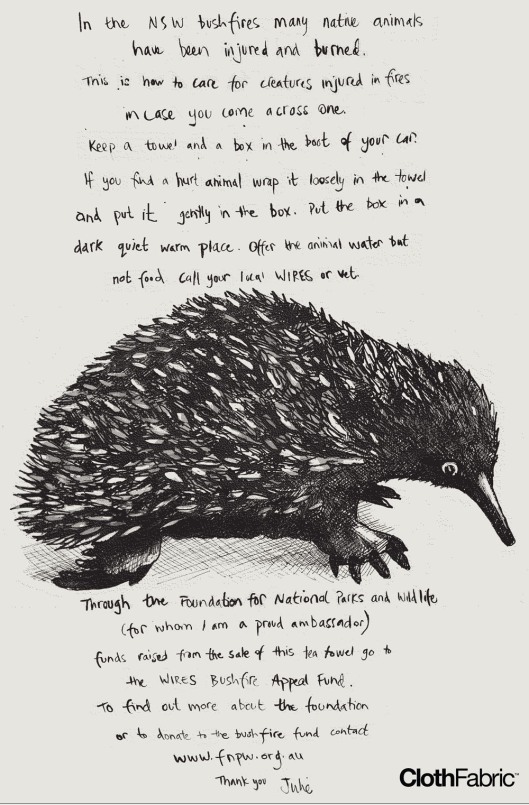 Julie has a property at Blackheath in the Blue Mountains. Fortunately, her house was spared by the recent bush fires in the region.

She chose an echidna for the second of her tea towel designs because they are slow and vulnerable. They can’t run fast. In times of stress, they curl up into a ball. The words on the tea towel tell you what to do if you come across and echidna needing your help.

When it’s hard to paint the clouds we draw the mountains. (Part of the Cloth Fabric ‘Imperfect Manifesto‘)

The first tea towel in the series is of a Banksia – a plant that needs the help of the smoke of a bush fire to germinate. Julie is still working on the third…

The tea towels are AU$38 each. Postage is free if you live in Australia, but they can be shipped internationally. You can learn more about the project and order the tea towels here.

And, while you’re having a look-see around the Cloth Fabric website, do check out their imperfect manifesto. I think it rocks.