I’m currently on the Autoimmune Protocol, a nutrient-rich elimination diet that removes foods that irritate the gut, cause gut imbalance and activate the immune system. You can read more about the protocol and why I’m doing this here. And, if you want to know why I’m on the sugar-free version of the Autoimmune Protocol, you can read about that here.

As I write this post, it is day 1 of my new sugar-free autoimmune protocol regime. I know – it’s been a whole week since my post when I told you all about it, but I’ve been waiting for all my medication and supplements to arrive (not to mention getting my head around the fact that my poor wee gut is so unhealthy despite all my hard work).

And then, all of a sudden it was Friday and almost the weekend, so when LM said “Why not start the sugar-free bit on Monday”, it was an easy yes…

And I’m only on the first day!

According to the ‘standard’ AIP guidelines, any sugar consumption should be limited to less than 20g of fructose per day. That works out at about a couple of pieces of fruit.

I don’t think I realised just how much sugar I was having every day – and, I was already on a pretty restrictive diet! But when you have to cut all fruit out of your diet, on top of any honey and dates and maple syrup and any other sweet something you may have been sneaking in, and your health is on the line if you cheat, well – it soon becomes clear that life just got a whole lot less fun in the eating department.

No more dairy-free ice cream. My pulled pork recipe is back to the drawing board now that I can no longer use a little maple syrup for flavour. No Orange Macaroon Balls in this girl’s immediate future. And, no more dark chocolate which had so successfully been reintroduced…

Given – on day 1, mind you – I was already wondering how to cope with a strict month of living on what amounts to meat, fish, bone broth, fat and vegetables, it will hardly come as a surprise that I got into the kitchen for some experimenting.

Desperation is a great motivator!

And, what I came up with won’t change the world. It possibly won’t even appeal to the many, many sugar-eating peeps out there in the real world. But – when sugar-eaten-in-moderation LM happily troughs a couple down after walking in the door, you know its not a bad first experiment…

So, without further ado, I give you my first 100% guaranteed sugar-free snack recipe. The secret here is the spices. They are pretty good at tricking your wee brain into thinking it’s having sugar.

I made two versions of these – cinnamon and ginger. Cinnamon trumped ginger. So that’s what you’re getting. 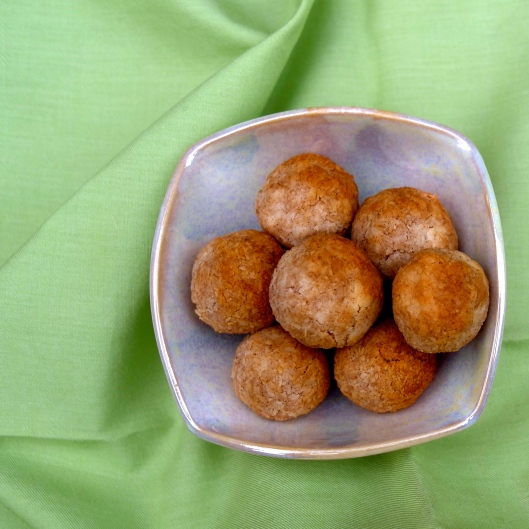 2. Mix all the ingredients together in a medium-sized bowl.

3. Form balls of the mixture and place onto your baking tray. I use my Tablespoon as a measure.

*It’s winter here in Sydney. My coconut butter was reasonably easy to work with. If your butter is rock hard, let it sit in a bowl of hot water until it softens. If your butter is too soft, place the fat bomb mixture into the fridge for 20 minutes to thicken up.