OK – now that I’ve woken you up with Dan Golden’s ‘Positive Energy’ rug (are you feeling it, yet?), let me tell you a wee bit about the man and his quirky, fun and fabulous work…

Dan Golden and his partner in crime, Jen Huh make up the art & design team that is Dan Golden Studio, based out of New York. The firm specialises in concept development and is currently designing new textile, lighting and furniture collections. They recently launched a range of home decor products for CB2 (which now ships to Australia!).

Dan Golden’s art and design work has been featured in many magazines and websites including The New York Times, The New Yorker, Fast Company, Interior Design, Veranda, The LA Times, Shelter, FORM, Angeleno, David Report, Behance and MoCoLoco. And now, it has been featured right here in This Sydney Life, too!

While I was tinkering about preparing for this post, I came across a CB2 interview with Dan.  Two things jumped out and really stuck. 1) the man is a massive dog lover.  He has a dog named Nutley (who is clearly massively loved), and 2) Apparently, years ago — when he was a waiter/aspiring singer-songwriter – he met Tom Waits. HE MET TOM WAITS! Dan says that Tom’s advice was to “be original and not try to be like anybody else. This advice was simple and true, and applies equally to being a designer.”  Looking at Dan Golden’s work now, I rather suspect Tom Waits’ advice was heeded.

The Dan Golden Studio pieces all have a recognisable design handwriting to them – for me, they are contemporary and clever, fun and humorous, uncluttered and, sometimes a wee bit ironic. I think it’s all great.  But then, I kinda’ like anything that looks good and makes me smile or think… 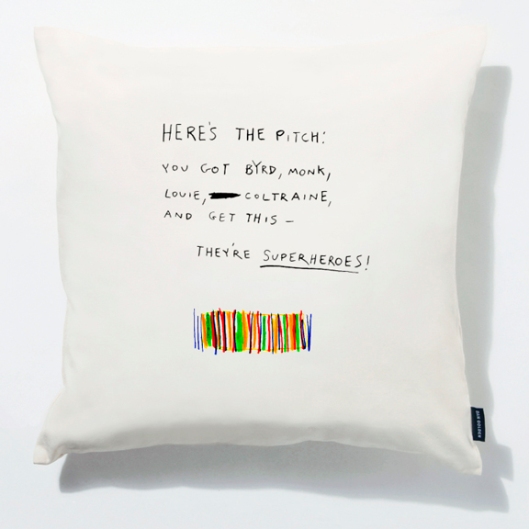 I want me one of these 'Jazz Superheroes' pillows

'Morphine is the Best Medicine' pillow 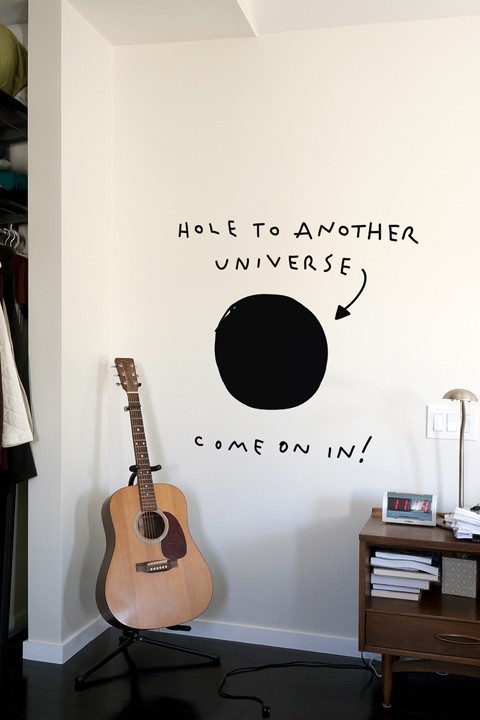 'Hole to Another Universe' Wall Sticker

Do you have a favourite Dan Golden piece?