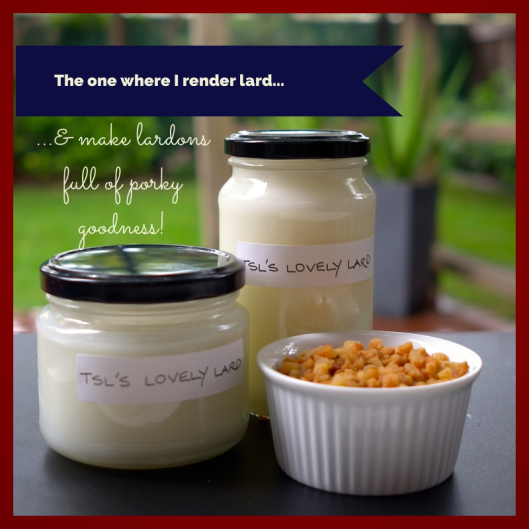 I’m currently on the Autoimmune Protocol, a nutrient-rich elimination diet that removes foods that irritate the gut, cause gut imbalance and activate the immune system. You can read more about the protocol and why I’m doing this here.

To me, life without veal stock, pork fat, sausage, organ meat, demi-glace, or even stinky cheese is a life not worth living. (Anthony Bourdain)

I have a secret confession. Sometimes I get sick of coconut oil.

I know coconut oil is considered the bees-knees in terms of healthy cooking fats. Truly, I do. I know it’s full of short-term medium-chain saturated fatty acids (MCFAs), which is a healthy form of saturated fat. And, I know it contains antifungal, antibacterial and antiviral properties to boost my immune system.

But, here’s the thing. Sometimes I just want something… well, porkier! Especially after I discovered that the boys at G.R.U.B. sell their own house-rendered lard. It is SO good!

The main fat in lard, oleic acid, is a fatty acid associated with decreased risk of depression. Who knew?

And, here’s another fact: lard also contains high amounts of Vitamin D, a fat-soluble ‘vitamin’. Those-who-know-these-things reckon that 1 tablespoon of lard has 1000 IU of Vitamin D! As someone who is deficient in Vitamin D, that was pretty good news!

So, armed with all this information AND because it tastes SO good, I’ve become a bit of a lard-lover…

The past few times I’ve been over visiting the team at G.R.U.B., there has been no lard. And, I have to say, it has been a bit of a disappointment. Yesterday was no exception. Lots of yummy, meaty goodies BUT NO LARD!

Clearly it was time to take matters into my own hands…

And, you want to know something? Making lard is easy! It’s also very economical. A 435ml jar of lard costs me $17. A kilo of back fat, which when rendered makes over 1 litre of lard, cost me just over $6. That’s a pretty impressive saving.

AND, I got a jar of the yummiest wee lardons to add to soups and salads and veggies, as well. Bonus!

Where I chop my back fat into teeny, tiny pieces
(Image by TSL)

Want to know what a kilo of fat looks like?
I have a greater appreciation for why it’s so hard to lose weight now!
(Image by TSL)

Freshly rendered lard – a thing of beauty!
(Image by TSL)

So, here’s what I took away from today’s lard making session:

– I like to chop. Call it my form of meditation. Having said that, chopping a kilo of pork fat into wee pieces by hand takes a while. (It should be noted that it also moisturises your hands nicely!). But, perhaps next time, I’ll ask the boys at the butchery to grind the meat for me.
– Making your own lard is kind of fun. Seriously.
– As with anything you make from scratch, there’s something about the commitment of time, that makes you look for opportunities to use that product. I find that all the time with bone broth. After I made the lard, I used some in my first-ever batch of plantain crackers. More on that next week!
– When you make your own lard, you get the added bonus of crunchy wee morsels of goodness that are lardons.

Have I sold you on lard, yet? I hope so! Here’s the recipe:

How to Render Lard AND Make Lardons 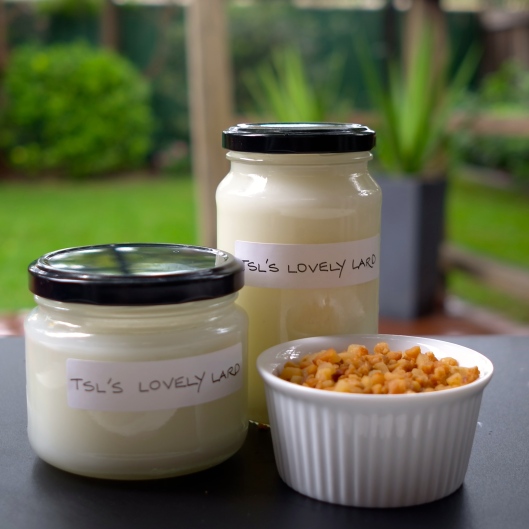 1 kilo pork back or leaf fat

It is VERY important you use fat from happy, pastured, hormone and antibiotic-free animals. Quiz your butcher on this. PLEASE.

You will also need a large pot, cast iron skillet or casserole. I used my trusty Le Creuset (again!) and a sieve and some cheesecloth.

1. If you haven’t managed to sweet talk your butcher into grinding all that lovely fat for you, take the time to dice it as finely as possible. The smaller you get it, the more lard you’ll make.

2. Place your pork fat into your pot, cast iron skillet or casserole. Turn your element onto low (I used a diffuser as well) and wait for the magic to start happening. You’ll need to keep an eye on it and give it the occasional stir. It’s important you don’t let the fat get too hot – if it goes dark brown, it is burnt and will taste bitter.

3. After you start to see a good amount of rendered fat, strain this through your cheesecloth over a sieve into a glass bowl. Return the un-rendered fat to the stove top and repeat. The strained lard can be poured into glass jars and put into the fridge until you’re ready to cook with it.

4. When the fat starts to turn golden brown, you are at the end of the rendering process. It’s time to make lardons! – turn the heat up to medium to allow all the remaining fat to melt. Discard this melted fat. When all you have left are delicious wee morsels of porky goodness of a medium brown colour, transfer the lardons to a large plate covered with a couple of layers of paper towel. Allow to drain and dry.

5. Pop your lovely lardons into an airtight container in the fridge until you are ready to add them to soups, salads and veggie dishes.