Clean Eating With a Dirty Mind Header
(Image from CEWADM)

I want to tell you about a fabulous woman. We have never met in the flesh, but I follow her gorgeous blog. It’s called Clean Eating With a Dirty Mind (CEWADM).  I can’t even remember how I found her. Probably through one of my random WordPress searches.

She lives in San Diego. At least, I think she does. She’s irreverent and funny and she conducts amazing experiments with paleo-oriented recipes which she tests on her non-paleo partner and various friends. If they make the grade, she posts them on her blog. I kind of wish I lived in San Diego so she could use me as one of her foodie guinea pigs. San Diego has Sea World, too…

Sidebar: For those of you who aren’t aware, LM and I sort of, kind of, follow a paleo-ish diet. With LM’s dairy and shellfish allergies, and my problems with gluten AND a real interest in eating less sugar and less processed food, a sort of paleo/primal/Weston A. Price/’real and traditional food’ hybrid is slowly evolving at Casa TSL.

And then, I might just have mentioned that LM’s favourite dessert of all time was trifle. Just in passing, you understand…

Guess what happened? THIS happened…

The oh-so-fabulous Vanessa at CEWADM created a paleo (read: dairy free) trifle recipe for LM. More specifically, she created two trifle recipes for him – a peach crunch number and a raspberry chocolate hazelnut version. HOW COOL IS SHE??? 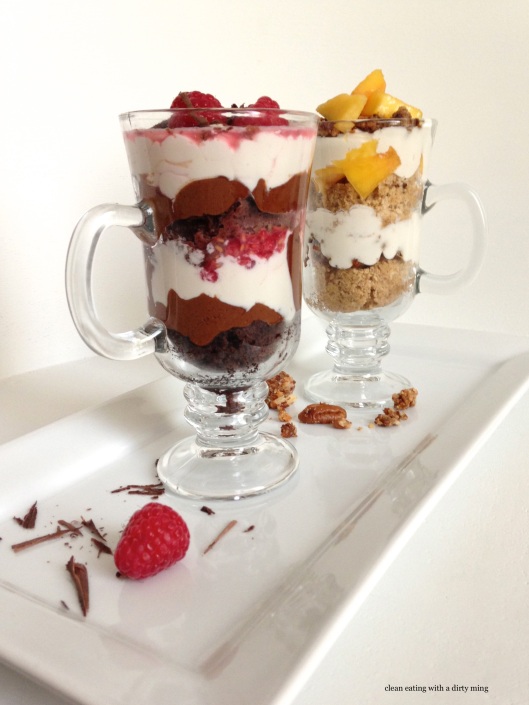 Paleo Trifles by CEWADM
(Image and recipe from here)

Go and check out Vanessa and her fab’ blog, including the special trifle recipe, (here) before she gets her cookbook deal. Trust me – you don’t have to be paleo to appreciate it!