Growing up, my sister and I were not part of the ‘ballet set’. Not even when we were very young. For starters, neither one of us would have been seen dead in pale pink. Not for us the pink leotards and hair ribbons. I didn’t even have one of those ballerina music boxes. Instead, my Mum’s godmother sent me a beautiful pillow, all the way from Germany, which – if I remember correctly – somehow played Eine Kleine Nachtmusik and smelled divine. I loved that pillow.

I do not recall ever feeling hard done by for not having a music box growing up, but I do vividly remember how I felt on one of my early visits to Paris when I discovered La boutique des Boîtes à Musique d’Anna Joliet (Anna Joliet’s Music Box boutique). This enchanting (and tiny) shop at the northern end of the Jardin du Palais Royal specialises in music boxes, both new and old, from Switzerland. 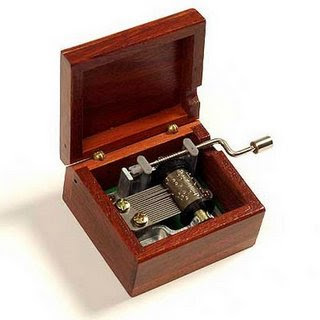 For almost three decades the store has occupied the same corner, next to a sign proclaiming that the writer Colette passed her last years here by the northern edge of the gardens of the Palais Royal. There’s hardly any room to move in the store, but it doesn’t matter because the melodies instantly transport you to your childhood (even when it didn’t feature music boxes!).

There are music boxes for every budget, some tiny cardboard containers with the inner workings displayed for less than 10 euros, or a gilded cage of warbling birds that costs upwards of 3,000 euros. I still have the small one I bought 20 years ago. It plays ‘Yesterday‘.

There may only be one thing for sale in Anna Joliet’s shop, but there is a seemingly endless variety of melodies from which to choose – from the classic “La Vie en Rose” to the wind-up tinkle of Elvis Presley’s “Love Me Tender” and the Beatles’ “Yellow Submarine.”

I shall be visiting again… 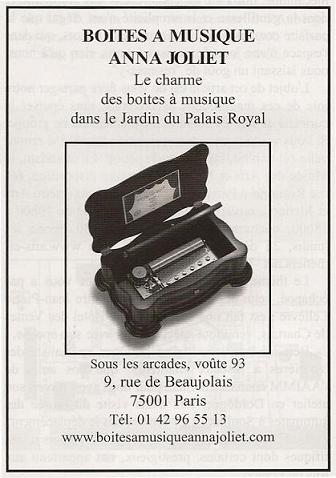