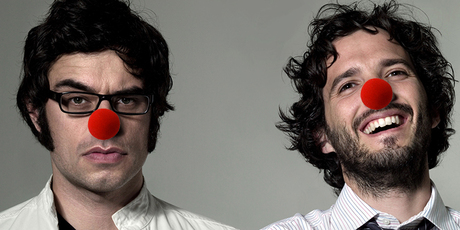 Remember Bob Geldof’s Live Aid concert back in 1985? Well, if you answered yes to that question, you’re officially old! Even if you’re too young to remember, the latest number from Flight of the Conchords and friends, and the accompanying video is going to give you enough warm-fuzzies to last all weekend. Promise!

Feel Inside (And Stuff Like That) was written and recorded by Bret and Jemaine for last week’s TV3 charity special Red Nose Day: Comedy for Cure Kids in New Zealand. The song hit No. 1 on iTunes after the show, and – after watching the vid’ –  I am not surprised.

The song’s lyrics came from primary school children at Clyde Quay School in Wellington and Grey Lynn School in Auckland, who were interviewed by Bret and Jermaine about their feelings on fundraising for the cause.

According to one of the ‘lyrical contributors’ (is that a term?), they need to raise “a million, and a hundred, ten and twenty-one dollars”. I shall be downloading my copy from iTunes.

Oh, and while I implore you to watch the vid’ – it is hilarious (even straight-faced Jermaine can’t prevent a smile) – do yourself a favour and grab a beverage before sitting comfortably. It’s 14 minutes long…

14 thoughts on “Feel-good Friday: Feel Inside (And Stuff Like That)”